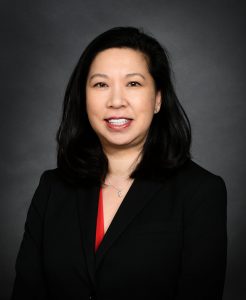 Winnie Chu is responsible for business development in the public sector and growing strategic alliances across AspireHR.  She has an impressive track record of managing and leading many successful large scale SAP HCM and SuccessFactors projects across a variety of industries, including public sector, healthcare, and retail sector.

Spending over six years as the Director of HR for a Federal Canadian security and intelligence organization, Winnie gained the experience and the insight to bridge the gap between HR processes and SAP technology. Her strong work ethic, and ability to communicate with both the Human Resources and Information Technology department enabled the success of her projects.  Winnie became an independent SAP HR consultant for various projects including Disney, Harland Clarke (Clarke America), Safety Kleen, Ezkenazi Health (Wishard Health Services) and Razorfish.  Prior to joining AspireHR in 2007, she was the SAP HR Global Manager for Cadbury Schweppes.

Winnie holds a Bachelor of Business Administration from York University’s Schulich School of Business in Toronto, with a double major in Human Resources and Marketing. She has been implementing SAP HCM since 1997 and received her Platinum Consultant designation from SAP America in March 2001. She is an active member of various organizations including Women in Technology International (WITI), and the Women’s Business Enterprise National Council (WBENC).  Winnie was named “VIP Woman of the Year” in 2010 by the National Association of Professional Women.

As a highly recognized SAP and SuccessFactors expert in the industry, Winnie has been a speaker at various conferences in the United States, as well as globally in Amsterdam, Milan, Barcelona, and Singapore.

See our products
in action.

Ready to talk?
Get in touch.